Trade dress can be a trademark and can be registered.

How nice. What the hell is trade dress?

Trade dress is the visual appearance of a product or its packaging that’s not functional.

Great. Clear as my aunt’s cataracts.

A non-functional aspect of a building can be trade dress. You can’t register the fact that your building has a roof, because buildings need to have roofs, but the blue roof of an IHOP® or the orange roof of Howard Johnson’s® can be (and are) trademarks because roofs don’t have to be a color. 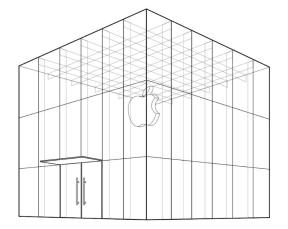 My favorite “building marks” are the glass cube Apple® Store and Al Johnson’s Swedish Restaurant and Butik® that registered “goats on a roof of grass.”

Did you say “goats on a roof of grass”? 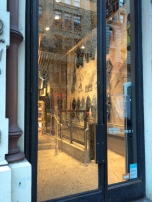 There’s also the door of seemingly broken glass used by Urban Outfitters® in some locations.

What else can be trade dress besides buildings?

The shape of a bottle has been and continues to be important for both beverages and perfumes. Excellent examples are the shape of a Coke® bottle, the shape of a Hendricks® gin bottle, and the iconic shape of the bottle for Chanel No. 5®.

Pockets on pants are functional, so you can’t have trademark rights in pockets, but you can register the shape of pockets, the stitching, and the placement of the label with the pocket. Here’s Levi’s® registered trademark.

Color. It’s amazing how much a trademark can rely on color. Sometimes, all you have to do is see a color and, without any words, or a logo, you already know what company it came from.

It’s just a rectangle in a certain saturated shade of yellow. And, yet, for most people, it screams National Geographic.

Does anyone have any question about where this box came from? When someone’s carrying a small shopping bag in this color, do you have any doubt about what’s in the bag? 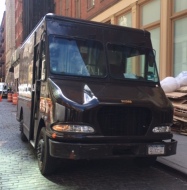 You know whose truck this is just by the color, without seeing the writing on the side. You’d even know one of their drivers by the color of her uniform.

You know what store this is, even though I covered over the words on the awning. 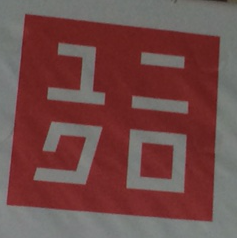 This sign is sometimes in katakana, but that doesn’t stop you from knowing which store it is just by the red square and the white lettering.

You know where I bought my iced tea without seeing the label on the cup, just because of the color of the straw.

Red soles on a pair of shoes. You know these were made by Louboutin.

There are lots more out there. That certain red of CocaCola. FedEx purple. The very particular shade of blue used on Southwest Airlines planes.

The next time you’re walking down the street, real or virtual, pay attention to how much brilliant brand identity is conveyed just with color and nothing more.

A: Yes, if the interests of free speech outweigh the rights of the trademark owner.[2]

OK: Maybe some examples will help.

HMMM: So, it’s OK as long as it’s hilariously funny.

NOPE: “First Amendment protections do not apply only to those . . . whose jokes are funny and whose parodies succeed.”[4]

SO: Really bad parody can be OK?

MAYBE: But if the parody totally fails then you’re probably infringing because when people don’t get the joke, they’re more likely to be confused about the source of the goods or service.[5]

UH OH: Maybe I just shouldn’t do it.

NO NO: Parody is really important and the courts go out of their way to protect the 1st Amendment from overzealous trademark owners.

BUT: If I do it, I’ll probably get sued.

OH YEAH: And only famous trademarks are worthy of parody, so the company suing you will have lots of money. But, Topps® made Whacky Packaging for years.

HA!: Yeah, until they got sued by Coleco over the Garbage Pail Kids series.

WELL: That did happen. What can I say? Comedy is a risky business.

[1] We’ll be talking about parody, but the rule is the same for any type of comedy, criticism, news reporting, or commentary. It’s just that parody really pisses off trademark owners and those are the ones that get litigated. “The message of these cases is not merely that parody is accorded First Amendment deference, but rather that the use of a trademark in the communication of an expressive message is accorded such deference.” Yankee Pub. Inc. v. News America Pub. Inc., 809 F. Supp. 267 at 279 (S.D.N.Y. 1992).

[3]  The image of the poster is about half way down the page.

[5] “A parody must convey two simultaneous – and contradictory – messages: that it is the original, but also that it is not the original and is instead a parody. To the extent that it does only the former but not the latter, it is not only a poor parody but also vulnerable under trademark law, since the customer will be confused.”Cliff Notes, Inc. v. Bantam Doubleday Dell Publishing, 886 F.2d 490, 494 (2nd Cir. 1989)