Jonathan Nielsen, the CEO of Backcountry.com, LLC learned that lesson the hard way.

As of this writing,* there are over two dozen registrations that include the word BACKCOUNTRY for various outdoor related goods and services that do NOT belong to Backcountry.com.

Despite that, Backcountry.com started opposing applications, trying to get registrations cancelled and filing lawsuits against companies they thought were infringing.

The consumers in that market started noticing.

Then, miraculously, Mr. Nielsen did the right thing.

He published a letter to the outdoor community acknowledging that his company “took certain actions that . . . were not consistent with [his company’s] values . . ..” Mr. Nielsen pledged to “reexamine our broader approach to trademarks to ensure we are treating others in a way that is consistent with the culture and values envisioned by our founders and embraced by our community.”

Way to go, Mr. Nielsen. We can’t get everything right all the time, but we can apologize, and get things right the second time.

What happens to a trademark application once it’s been filed?

There were 1,396 applications to register trademarks filed with the U.S. Trademark Office that day.

494 of those applications are dead and gone.

Another handful, 62 applications, are still in process. Some are being opposed and some are still trying to prove use. I estimate that half of those 62 will be dead before it’s over.

How did all those 494 applications die? 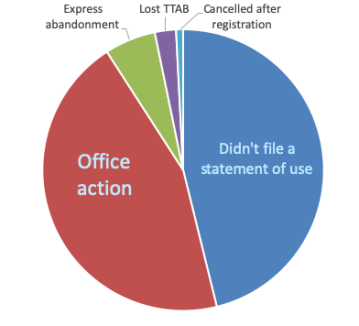 There are lots of things that can happen to an application once it’s filed. The best way to avoid a bad outcome is to file an application for a trademark that has a low likelihood of running into problems.

Thanks to Max F. for the suggestion that led to this blog.

[1] I picked that date because it’s relatively recent but far enough in the past to have allowed most things that can happen to happen.

[3] Many of those office actions refused registration because the trademark was “confusingly similar” to another trademark or because it was “merely descriptive” or “generic.”

What’s most interesting to me is how few of the applicants even tried to move ahead after the Trademark Office refused to register their trademark. Of the 221 applications that were refused and are now dead, only a few responded to the Trademark Office with arguments as to why they should be registered. I’m sure many of those had no chance even if they did respond but I suspect that a good size chunk could have made it with a fairly simple response.